Industrial wind: a bill of goods

The full speech can be downloaded by clicking on the below link. http://www.windaction.org/documents/12400
Posted by Advocates for Arkwright at 12:45 PM No comments:

This list of resources was provided by Jon Boone to supplement the information in his presentation:

On May 3, 2007, the National Research Council of the National Academy of Science, at the behest of Congress, published it conclusions after a year of study about the Environmental Effects of Wind Energy Projects in the nation’s Mid-Atlantic region
(www.vawind.org/Assets/NRC/NRC_Wind.htm). It comprehensively evaluates the problems and limitations of the wind industry over a range of issues. See especially Chapter 2 for a Context for Analysis of Effects of Wind-Powered Electricity Generation in the United States and the Mid-Atlantic Highlands.

Jesse Ausubel, noted conservation biologist and climate change researcher, and Director for the Human Environment at Rockefeller University, recently published a brief essay, Renewable and Nuclear Heresies in the International Journal of Nuclear Governance, Economy and Ecology, Vol. 1, No.3, 2007 (http://phe.rockefeller.edu/docs/HeresiesFinal.pdf). He discusses the importance of conserving important natural habitats on land and the oceans, shows the intrusive nature of renewable energy projects, and summarizes the continuing per capita decline in the use of carbon for energy.

Britain’s David White wrote Reduction in Carbon Dioxide Emissions: Estimating the Potential Contribution from Wind-Power, commissioned and published by the Renewable Energy Foundation, December 2004: www.windaction.org/documents/225 . It is a thorough, beautifully reasoned analysis of the limitations of industrial wind as a source of energy and as a method of reducing CO2 emissions.

Tom Adam’s Review of Wind Power Results in Ontario: May to October 2006 published in Energy Probe, November 15, 2006: www.energyprobe.org/energyprobe/articles/EPreviewofwindpowerresults.pdf. Adams is executive director of Energy Probe, an independent consumer and environmental research team in Canada. He provides a detailed analysis that reports accurately about the subject, despite Energy Probe’s active support of industrial wind development.

E.ON Netz GmbH Wind Report, 2005: www.ref.org.uk/images/pdfs/eon.2005. These reports provide the most comprehensive summary of the way in which extensive wind facilities affect grid operations in Germany.

National Wind Watch: (www.wind-watch.org) was the first nation-wide organization dedicated to understanding industrial wind issues, in the process gathering thousands of articles and news stories about the industry, and then providing informed interpretations for the public’s edification and education. Many newer organizations stand on NWW’s shoulders. Now the president of National Wind Watch, Eric Rosenbloom is a science writer who lives in Vermont. He also maintains perhaps the nation’s best wind blog: http://kirbymtn.blogspot.com, as well as the website, Industrial Wind Energy Opposition: www.aweo.org, which contains a cornucopia of facts and research about the subject.

For those interested in a comprehensive analysis of the issue vis a vis a regulatory wind hearing, consult Jon Boone’s Maryland Public Service Commission testimony (www.stopillwind.org/lowerlevel.php?content=Downloads) as an intervenor in the Synergic Wind case, including his Responses to a variety of Data Requests and his Appeal to the Proposed Order of the Hearing Examiner.

Both his speech tonight in Westfield, Industrial Wind: A Bill of Goods and his introductory remarks at the League of Women’s Voters wind debate in Fredonia, will also soon appear on stopillwind.org.

Life Under a Windplant, Jon Boone’s documentary about the Meyersdale, PA wind facility, which he produced and directed with David Beaudoin, can now be seen in three parts on Youtube: http://www.youtube.com/watch?v=SNxvkrgoPLo&mode=related&search=. It features how the wind plant affects the lives of the people in the community and shows the sights and sounds that emanate from 375-foot tall wind turbines sited atop surrounding ridgetops.
Posted by Advocates for Arkwright at 11:36 AM No comments: 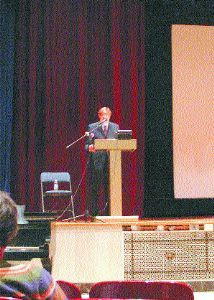 Posted by Advocates for Arkwright at 11:33 AM No comments:

Presenter in Westfield Critical of Windmills

WESTFIELD — The road to hell is lined with windmills, or at least that what many Westfield residents seem to think.

Jon Boone, a retired administrator from the University of Maryland and a consultant with the Roger Tory Peterson Institute in Jamestown, likened wind power development to the saying “the road to hell is paved with good intentions,” with little debate from residents.

Boone said he had once been “seduced by wind power” but he decided to research it fully because “I know if something seems too good to be true, it probably is.”

Boone presented his investigation into wind power earlier in the day Wednesday at the League of Women Voters wind power meeting at SUNY Fredonia. He expanded on his studies that evening at the Westfield Academy and Central School.

Town Board Supervisor Martha Bills and several other board members who are currently negotiating a possible new wind power deal with a developer were present to hear Boone speak.

Boone produced a documentary entitled “Life Under a Wind Plant” as part of his testimony to a public service commission on wind power in Maryland. The documentary was a case-study of the town of Meyersdale. Residents who lived within a mile or two of the wind turbines on their mountain ridge complained of health problems due to the noise causing sleep loss, the strobe effect of the sunlight through the turning turbine, and dust and odor spread by the turbines. One resident even experienced low frequency vibrations which caused adverse health effects.

The jobs that had been promised to the Meyersdale community as a result of the wind development ended up being only two full-time jobs as maintenance workers.

Property values also decreased drastically in the area because of the wind turbines obstructing the natural view of the mountains. One home sold for 80 percent less than the fair market value.Boone stated electricity is only a small percentage of the energy used in the United States; most of it is for heat and transportation, so the idea that wind energy could drastically reduce the amount of fossil fuels released seems far-fetched.Boone pointed out the "feckless" nature of wind turbine power, given that it is reliant on something as capricious as the wind. He reported on studies that revealed that more than half the time, wind turbines produce less than 11 percent of the power they are supposed to be able to generate.

Boone commented that local governments have generally handled wind power development badly and recommended the residents become more informed.“Ask good questions and demand solid proof,” Boone advised the audience. “Be especially vigilant about those who live else where and have a financial stake in it.”Boone was invited to speak on behalf of the Chautauqua County Citizens for Responsible Wind Power.

For more information on Boone and his studies, visit his Web site at www.stopillwind.org.
Posted by Advocates for Arkwright at 11:24 AM No comments:

LECTURE AND FILM ON WIND ENERGY ISSUES COMING TO WESTFIELD

WESTFIELD- Writer, filmmaker, artist, and environmentalist Jon Boone will present his views on the wind industry, and screen his documentary “Life Under a Windplant” Wednesday, October 17, 7 pm at the Westfield Academy and Central School auditorium. This public event is sponsored by Chautauqua County Citizens for Responsible Wind Power.

“Jon Boone has done extensive research about claims made by the wind industry, and his film “Life Under a Windplant” has been seen internationally. Wind development is a hot issue in our area, and we’re very fortunate that Jon has agreed to visit Chautauqua County,” said Rev. Paul J. Coran from CCCRWP.

Jon Boone has been a formal intervener in two Maryland Public Service Commission hearings. He produced and directed the documentary, Life Under a Windplant, which has been freely distributed within the United States and many countries throughout the world. He also developed the website Stop Ill Wind, www.stopillwind.org, where anyone can read his complete direct testimony, with many related documents, in the Synergics wind case before the Maryland Public Service Commission. He seeks informed, effective public policy that avoids wishful thinking because it is aware of the unintended adverse consequences flowing from uninformed decisions.

His 2006 speech The Wayward Wind, given in Wyoming County, NY will be published next year by McGraw Hill, as will his recent scholarly essay, Less for More: The Rube Goldberg Nature of Industrial Wind Development.

A lifelong environmentalist, Jon helped create the North American Bluebird Society and has been a consultant with the Roger Tory Peterson Institute in Chautauqua County. He is a former university administrator and now a painter/artist who receives no income from his work on wind technology.

Westfield Academy and Central School is located at 203 East Main Road (US Route 20) in Westfield, NY. For more information, one may call 326-7572. The lecture is open to all.
Posted by Advocates for Arkwright at 9:31 AM 2 comments:

About Advocates for Arkwright

Advocates for Arkwright
Arkwright, New York, is located in Northern Chautauqua County. Those of us fortunate enough to live here, or vacation here, enjoy the starry skies, gorgeous views, and recreational opportunities right outside our back doors.